Song On The Slab (feat. Bobby “Pentagram” Liebling, dedicated to Phil “Thin Lizzy” Lynott) • Performed by Falcon • Recorded on Fri 21 Nov 2003
On releases
Back to... 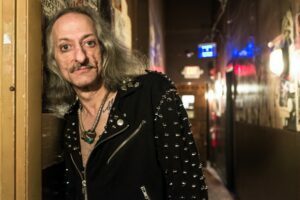 Pentagram is a US Doom Metal band that formed in 1971. They released a bunch of singles and demos in the 70’s, until finally the debut album was released in 1985.

All tracks are mixed except one. We weren’t quite satisfied with my vocals on “On the Slab,” so the possibility of having Bobby Liebling from Pentagram guest on vox on that song was brought up by Chris Kozlowski. I left lyrics and a short note for Bobby before departing for Cali. Bobby phoned yesterday and we had a good talk about “On the Slab.” We’re honored to have Bobby workin’ with us on this one and expect to have the track finished up in about another week. Really lookin’ forward to this one, as it’s dedicated to Thin Lizzy bassist/singer Phil Lynott, a big hero to Bobby and the Falcon dudes.

Just got a CD-R of Bobby Liebling singing On the Slab, and I have to say that I was blown away by his performance—and I hope you’ll feel the same way when you hear it.

I sang it on the demo and also in the studio. Wasn’t 100% satisfied with my performance, so we decided to let Bobby have a crack at it. We haven’t been playing it live, but we will, and I’ll be handling the vocals. Unless of course we get to play with PENTAGRAM or just in the D.C. area, in which case I’ll invite Bobby up on stage!

The possibility of having Bobby sing a tune on the FALCON album was brought up by Darin McCloskey, and I think all three of us were up for it. But we had a very limited time to get the recording done. It was towards the end of our fifth and last day of recording when I went back to try to sing “On The Slab” again. While I felt I was doing better at it than I had the day before, it was still the one song that we thought could be a bit better. So, Chris Kozlowski again brought up Bobby, and we all jumped at the chance. I left a brief note and the lyrics for Bobby with my phone number. Greg and I flew back to L.A., and Bobby called me about two days later to say how floored he was by the track. Which in turn just blew my mind, ’cause I really admire Bobby as a songwriter. He was thrilled to be able to pay tribute to his (and our) hero, Phil Lynott. When he said how much “On The Slab” nailed THIN LIZZY’s style, I was just speechless. To this day I’ve never met Bobby, but we had some good long talks on the phone, and I hope to see him the next time I’m in the Maryland/D.C./Virginia area 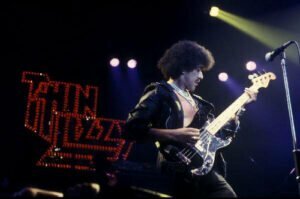 I liked what little Lizzy I heard on the airwaves as a small kid, but it took years till I owned an album. I went slightly backwards. I was a die-hard Maiden fan in the late ’80s, but didn’t get into Lizzy and Wishbone Ash until the early ’90s. I’ve been paying a lot more attention to the older dual axe attack bands like Lizzy, Wishbone Ash and Bubble Puppy/Demian than Maiden for a long time now. Maiden popularized the twin harmony leads, but the older bands were a little less one-dimensional. Once I got Jailbreak back in the ’90s I went nuts, snagged Lizzy’s entire catalog. Even the Eric Bell-era stuff. I found myself writing those Irish and Celtic inflected melodies and dual harmony parts. What about my tribute to Phil Lynott on the S/T Falcon album? “On the Slab” is an enormous nod to Lizzy. Specifically the Brian Robertson/Scott Gorham lineup. Phil penned amazing lyrics and was one of the best pick-playing bassists ever. He was a poet, a bad-ass and tortured at the same time. The junk may have made him manipulative, but otherwise he was one of the true geniuses of rock.

“On the Slab” is my tribute to Phil Lynott and Thin Lizzy. I’m heavily influenced by both the Eric Bell-era power trio and the classic lineup with the duelling guitars of Brian Robertson and Scott Gorham. They’re a special band for Greg Lindstrom too. He and Cirith Ungol drummer Rob Garven used to wear homemade Thin Lizzy t-shirts on their rounds of SoCal record shops like my old hangout, Moby Disc in Canoga Park. The title stems from the story of the same name by Harlan Ellison. “On the Slab” was Ellison’s paean to H.P. Lovecraft. This one’s rooted in reality rather than fantasy. It’s painfully obvious that this tune is a tale of a smack addict going down the drain on drugs. It could just as easily encompass blow and meth as well. (As in “inhaling your death off a slab”.)

Ironically, “On the Slab” has guest lead vocals by none other than Pentagram’s Bobby Liebling, himself a storied smack and crack addict for the majority of his life.

I originally laid down vocals on both the demo and album versions of the tune, but I just wasn’t happy with the results. As the vocal tracking came to a close it was evident that I’d either need to revisit it or… The possibility of Bobby coming in to lend a hand – or pipes. Bobby previously made a guest spot on Pale Divine’s Thunder Perfect Mind, on the tracks “20 Buck Spin” (a Penta-cover) and “Dark Knight”. So, it goes without saying that both drummer Darin McCloskey and engineer Chris Kozlowski were friends of Bobby’s already. The latest version of Pentagram (with the 3 instrumentalists from Maryland doom kingpins Internal Void) was finishing up tracks for the Show ‘Em How album, also with Chris Kozlowski at the helm. Kelly Carmichael (guitar) and J.D. Wiliams (vocals) from Internal Void paid a visit to us while we were recording overdubs. At Chris’ recommendation I left my lyrics sheet and a note to Bobby with my cell phone number. I didn’t expect he’d want to sing it due to the too close-to-home theme. On the contrary, Bobby rang me up and raved about how authentically Lizzy-like the tune was and that he’d be very happy to vocalize a tribute to our and his big hero, Philo. Bobby rang me several times, even during the wee hours of the morning. He left me messages to show me how he wanted to sing parts. We had some good phone chatter. In the end, we were thrilled with Bobby’s rendering. Bobby went off the rails again around the time we released the S/T Falcon CD. I called him and he nodded off on the phone. A while later he screwed over the Internal Void guys by collapsing on stage at their first (and only) gig before a note was even played. Hopefully he’s doing better now than he was back in ’04. To this day I’ve never met Bobby, but we had some good long talks on the phone, and I hope to see him live with Pentagram someday.

From their first album on, Thin Lizzy has been one of my biggest musical influences, although it may not always be obvious. And even though their early albums are a bit spotty, I’ve got a special fondness for the Eric Bell lineup. Cirith Ungol played covers of “Gonna Creep Up On You”, “Vagabonds Of The Western World”, and “Return Of The Farmers Son” for quite a few years.

Shootin’ up and tappin’ your veins
You’re burning out, hangin’ by gallows high
Makin’ my gallows high
Stars goin’ nova before their time
At the end of your rope
You’ll inhale your death off a slab
On the slab

Chorus:
I still remember those days when rock legends they died hard
Never learning their lesson, stickin’ those needles in their arms
Never heeding that warning till they’re laid out on a slab 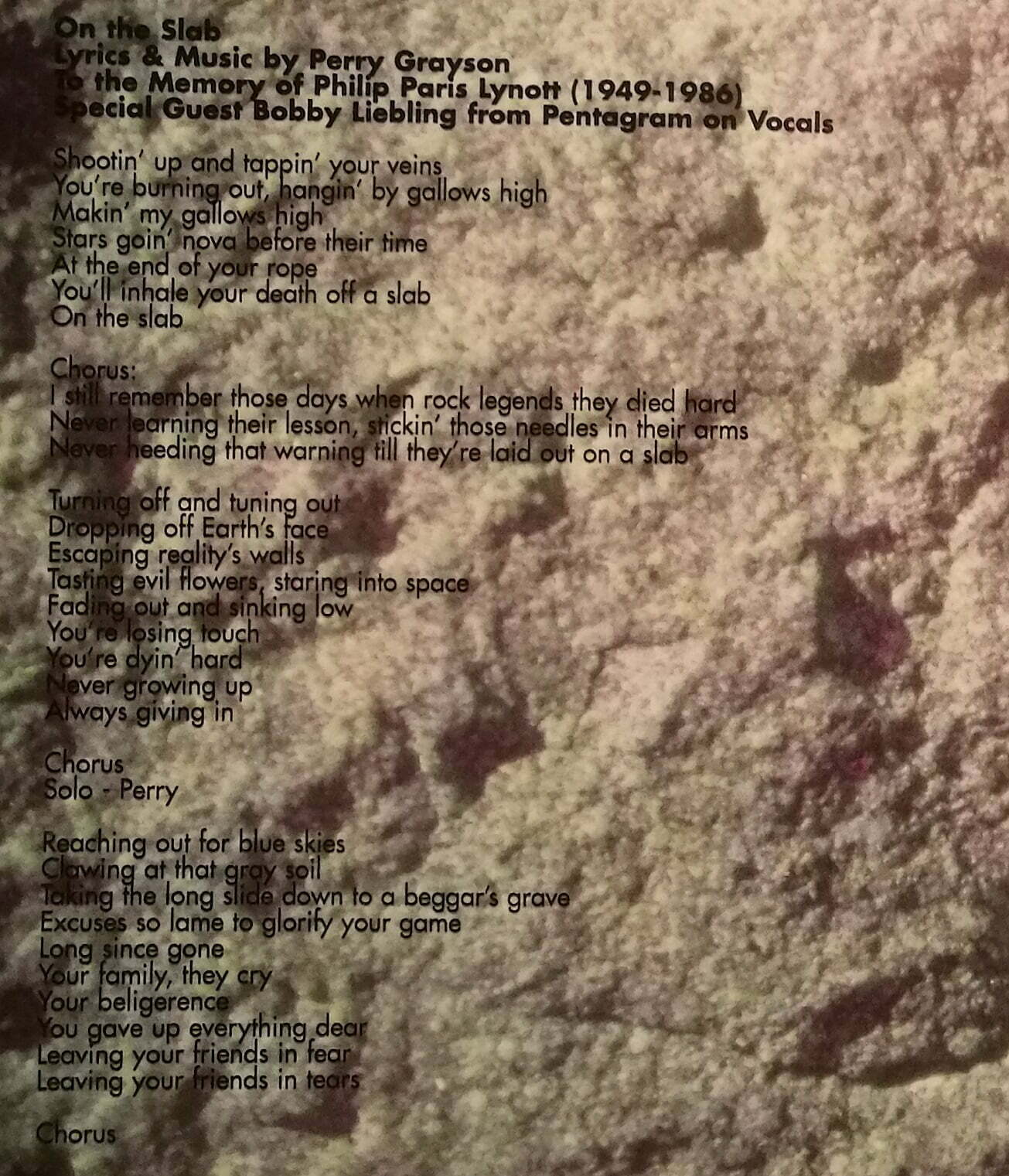