Jerry quit the band after the release of One Foot In Hell because he was depressed at the fact we had been together for about fifteen years and although we had sold quite a few albums and had lots of fans worldwide we could never seem to get the support we feel we deserved. Our goal was to get signed to a major record label, so we could go tour Europe, where we had always dreamed of going to play. We would work at the band room four or five nights a week answering fan mail, writing new songs and playing for our local fans. We kept waiting for a big break that never came. After Jerry left the band he stopped playing, and his life seem to spiral downhill. He was drinking pretty heavily, and he finally drank himself to death, alone sad and unhappy. I talked to him recently before his death, and he finally admitted that his leaving the band was a huge mistake which he had regretted all along. The sad thing about his death is the loss and squandering of so much talent. Listening to Jerry’s solos sometimes bring tears to my eyes, he played with so much feeling and emotion. One solo that comes to mind is the double lead in “Cirith Ungol”, the intertwining guitars weave a tale of sadness and hopelessness which I feel is the high point in our long and sad tale. I miss him very much, not that we were that close at the end, but I miss his talent which is lost forever!

With Jerry Fogle gone we have lost one of the greatest unheralded guitarists ever to walk the earth.

Jerry Fogle should be mentioned in the same breath as Tommy Bolin and Randy Rhoades. I’m going to make it my personal mission to get CDs to every guitar magazine I can so more people can discover what an incredible guitar player he was. 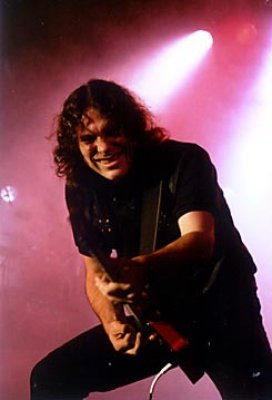