Song Return To Lankhmar (Demo 1980) • Performed by Cirith Ungol
On releases (2 numbers or more)
Back to...

Not sure if this version is different from the one that originally appeared on the 1979 Demo.

(Aug 80) I think I recorded this the day after I got my Korg PolySix. Imagine, a synthesizer that could play more than one note at a time! By the way, I stole the ‘Lankhmar’ titles from the late Fritz Leiber’s ‘Fafhrd And The Grey Mouser’ series. If you like heroic fantasy, check them out.

The picture is the first book in the series, “Fafhrd and the Gray Mouser”, where the Lankmahr title is taken from. Available at eBay and Amazon. 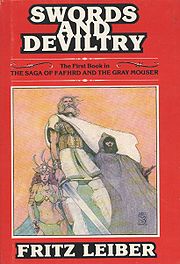