King Of The Dead

Song King Of The Dead • Performed by Cirith Ungol • Recorded on Sun 01 Jan 1984
On releases
Other versions or concerts
Back to...

The title track, written by Robert Garven. It’s Jim Barraza’s favourite song on the album and Rob’s third favourite Ungol song. The photo is probably taken from a 1991 show.

The title cut follows and againt we’re treated to a huge dose of classic C.U.. Dread (what else?). The bottom end bass just roars from Michael “Flint” Vujea and the almost subliminal, psychedelic tones in the guitar gives way for drummer Robert Garven’s infamous gong. And the stage is set for almost 7 minutes of all that makes Cirith Ungol great. This song is a perfect showcase of where the band’s dark heart lies.

I loved this song, it made me feel like a caveman. At the beginning bars I envisioned Roman troop’s feet marching by the thousands! I really got into the drums on this song, many time I would play so hard I would break my cymbals and my hands would bleed all over my drums until they were splattered in blood!

We really did not do too much stage show stuff until near the last half of the band’s life. We were pretty heavy from the start and even when we went out and played we blew most other bands away.  Somewhere I got a catalog that had some pyro-stuff in it and I had some really cool things on my cymbal that shot balls of fire into the air, sometimes up to 25 feet. It was very cool. By the way, we never killed anyone. We also had a coffin made and the roadies would carry Tim out in it and tilt it up and open it and Tim would come out in a crown singing “King of the Dead”! There is a small pic of that on the new tribute CD that just came out in Europe.

A fan made music video using footages from Lord of the Rings movie. Created by defiledthrones

KING OF THE DEAD!

#Doodle whilst listening to #cirithungol titled king of the dead. #skull #sketch

Crown upon his head
King of the Dead 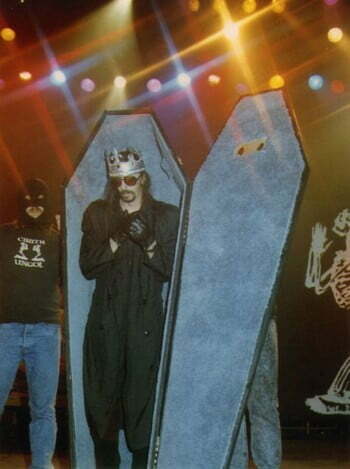