Prologue: Paradise Lost… / Chaos Rising / The Grapple For Power. Part 1 of The Chaos Trilogy. This and the following two songs, are sometimes referred to as “Tim Baker’s trilogy” or “The Chaos trilogy”, as they were written by Baker, and are the most epic songs on the album. These three songs are also the bands favorite on the album. Written by Tim Baker already in 1987. Jim Barraza’s favourite song on the album.

The Chaos Trilogy is some of the best stuff CU has done, I think, but it’s also a little bit more generic, Iron Maiden-ish sounding.

The doomed one s fallen armies sound the tolling of the bell,
While sin and death stand silent guard outpage the Gates of Hell.
He slowly spreads his leather wings and soars above the land,
He strokes his pointed beard and casts an evil eye toward man.

Unchains the dogs of chaos to complete his evil chore
To make the cringing herd of man his thralls by right of war.
They gorge on fatal fruit, taste of dust and bitter ash,
While fire burns in Heaven and immortal forces clash.

The smell of burning brimstone – lightning flung from golden hands.
To rule without a master is the only dream of man.
As they swap our souls among them and prepare the final feast,
Begin the war eternal – cast apage both God and Beast.

Moving toward the evil song that fate will sadly sing,
How the pride of man has fallen, crowning lust their only king.
Heaven screams in anguish and the world cries out in pain,
Unleash the final terror – man begins his now doomed reign. 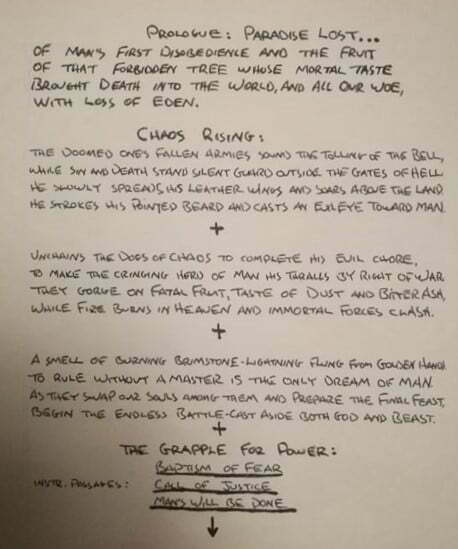