Recorded at OUTLOOK studios…It was a very simple recording..on 8 track
everything was recorded live…and then we overdubbed leads..and background
vocals…in an afternoon…it’s is an accurate portrayal of the band at the time
raw and in you’re face…kick ass!..that’s “PROPHECY

Thanks very much to Scott Campbell for all of this. R.I.P.

Check it out: White Tape Demo

These links are automatic generated links and may not always give the best search result. Sometimes you might need to refine the search after having tried any of these links. If you know about any good deal for White Tape Demo, don't hesitate to add a link in the comment field or in the forum. 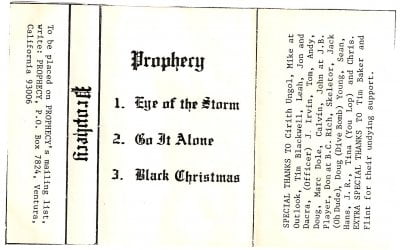