And only online (tracks and some video), but not Heavy Rawkin’ Rare album:

There are currently no Falcon DVD’s released.

There’s also some live video footage that we might throw onto a DVD at a later date. Definitely lots to look forward to.

Edge of a Knife (live) can be seen here

Awful quality on this video!

Tribute to the New Wave of British Heavy Metal

This is a planned but unreleased sampler supposed to contain a Falcon song.

Falcon is currently selecting a song to cover for The Miskatonic Foundation’s TRIBUTE TO THE NEW WAVE OF BRITISH HEAVY METAL compilation.

This is a planned but unreleased 7″ split single with Falcon / Triarchy.

Metal Coven Records in Germany are talking to us right now about the possibility of releasing a 7″ split single with one page from the British band Triarchy, and one page of Falcon material. Probably “Shelob’s Lair” when it’s re-recorded.

This is a planned but unreleased 7″ split single with Falcon and Ogre.

We’re talking to Metal Coven Records (Germany) about the possibility of a Falcon/Ogre split 7″ single for you vinyl maniacs out there. 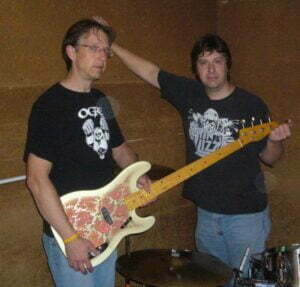 Falcon. Greg Lindstrom in an Ogre shirt and Darin McCloskey in a Thin Lizzy shirt.

“What was a frozen plan that lasted at least two years, comes out now finally! Aborted by many reasons and put to rest through a long hiatus, it’s now time to present the much deserved Buffalo tribute with 12 great international Heavy Rock/Doom acts from the U.S. to Portugal and Spain, with Germany, UK and Italy in between. These are mostly unreleased songs presented on CD, to celebrate the greatness (and heaviness) of Australia’s premier Doom Rock & Rollers! Approved by Mr. Dave Tice himself (who left some nice comments in a few versions he’d heard), with 16 page booklet and sleeve art done by Rod Wolf from Midnight Priest, this is a release not to be missed for all who give a damn to 70’s Heavy Rock! Clearly Blood & Iron is doing it. Many didn’t believed and some also forgot, but good news on the horizon: The job is done!”

This record has been delayed for several years! It was recently scheduled for 01 Jun 2011, but upon contacting the label, I was told it will be not be out before 25 Jul 2011. In 2013 it was finally cancelled.

Check it out: Heavy Rawkin’ Rare

These links are automatic generated links and may not always give the best search result. Sometimes you might need to refine the search after having tried any of these links. If you know about any good deal for Heavy Rawkin’ Rare, don't hesitate to add a link in the comment field or in the forum.