Perry Grayson founded this band together with Greg Lindstrom (one of the founding members of Cirith Ungol) and Darin McCloskey (Pale Divine) to make heavy rock in the style of the 70s. They’re also doing some Cirith Ungol songs that never got properly recorded in a studio. Since Darin McCloskey lives far away, live performances are usually played with drummer Andrew Sample.

Falcon is a raw late 1960s/early 1970s style heavy rock power trio. Falcon was founded by Los Angeles area guitarist/vocalist Perry Grayson (ex-Destiny’s End) and bassist/keyboardist Greg Lindstrom (Cirith Ungol) in 2002. Drummer Darin McCloskey (Pennsylvania’s Pale Divine) came into the fold in 2003. Falcon recorded a 4 song demo in Spring ’03, which received rave reviews from the hard rock and metal press in both the U.S. and Europe. The band recorded their debut album in ’03 and it was released in August ’04. Local drummer Andrew “Drewcifer” Sample was brought in to serve as Falcon’s live drummer in L.A. in ’04. Perry had the name Falcon in mind for a bluesy/psychedelic heavy rock band ever since his early days of playing. Hooking up with Greg Lindstrom in 2002 gave Perry the means to get things moving finally.

Greg Lindstrom was a founding member of Cirith Ungol (1971-1982), and he played on their debut LP, FROST & FIRE (’80) and wrote material forKING OF THE DEAD (’84) and ONE FOOT IN HELL (’86). Greg started out on bass in Cirith Ungol, eventually switching over to guitar and keyboard (alongpage the late guitar wizard Jerry Fogle, R.I.P.). Incidentally, although the bass on FROST & FIRE was credited to Michael “Flint” Vujea, Greg actually played all the bass on that album. Greg also played additional lead guitar on the debut Falcon disc and DIE WONTCHA. Some of Greg’s early work with Cirith Ungol can be heard on the two disc collection SERVANTS OF CHAOS.

Perry Grayson was in metal band Destiny’s End (1997-2000), playing on and writing tunes for both Metal Blade Records releases (BREATHE DEEP THE DARK and TRANSITION). Perry’s travels with Destiny’s End included a U.S. tour with Iced Earth and Nevermore in ’99 and a European tour with Sacred Steel, Wardog and The Lord Weird Slough Feg. The high point being a set at the illustrious Wacken Open Air Festival in Germany (August ’99). After leaving Destiny’s End in ’00, Perry helped form Artisan with his friends Mike Bear (bass/vocals) and Ana Greco (guitar/vocals). In Artisan, Perry shared vocal duties with Bear and Greco, opting for an aggressive style similar to Chuck Schuldiner (Death), Darren Travis (Sadus) and Rob Urbinati (Sacrifice). While still in Artisan, Perry had already begun setting Falcon’s wheels in motion. Perry played his last gig with Artisan at the Whisky in Hollywood supporting Cathedral in September ’03, but he remains best of friends with the band. Bepages Destiny’s End, Artisan and Falcon, Perry has also recorded with Isen Torr, a New Wave of British Heavy Metal flavored project consisting of members from the U.S., England and Germany. Isen Torr, incidentally, is spearheaded by Perry’s English guitarist pal Rich Walker (Solstice). In ’05 Perry was touring bassist for Pale Divine on their European tour with Place of Skulls and Rising Dust.

Darin McCloskey founded Pennsylvania doom metal merchants Pale Divine around 1997. Apage from his dynamic drumming, he also pens lyrics for Pale Divine. Darin’s travels with Pale Divine included a couple of appearances at the Stoner Hands of Doom Festival in the States and tours in Europe & the U.S. with Place of Skulls (’04 and ’05) . Perry got in touch with Darin after going nuts for Pale Divine’s first demo, CRIMSON TEARS, in ’97. A die-hard fan of Pale Divine, Perry knew Darin was precisely the right man for the job of drummer in Falcon. Darin has played on both Falcon’s full-length studio outings and played a historic Falcon gig in L.A. with San Francisco metallers Slough Feg.

Falcon’s Los Angeles-based live drummer from ’03 to early ’06 was Andrew “Drewcifer” Sample. Sample moved to Kansas in spring ’06, but remains very active in metal and rock as a DJ and writing for Metal Maniacs. As much a maniac for heavy ’70s rock as the rest of the Falcon members, Andrew was a shoe-in for the job. If not for Andrew, Falcon wouldn’t have started gigging in L.A. in early ’04. And thanks to Andrew, Falcon managed to play shows alongpage Fireball Ministry, Earthride, Sasquatch, Shakey Mallard, Slough Feg, Smoke, Weedeater and Butcher.

Falcon completed work on their second album, DIE WONTCHA over a week period in October ’06. DIE WONTCHA was released on May 6th, 2008. 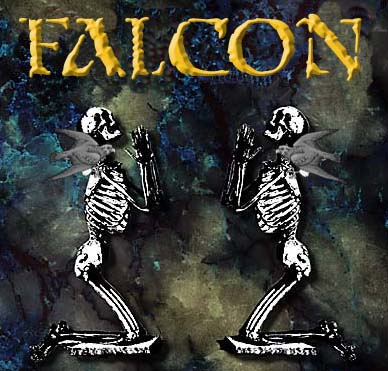 Check it out: Falcon

These links are automatic generated links and may not always give the best search result. Sometimes you might need to refine the search after having tried any of these links. If you know about any good deal for Falcon, don't hesitate to add a link in the comment field or in the forum.