Ronnie James Dio (born Ronald James Padavona) was an American heavy metal vocalist and songwriter. He founded/fronted numerous groups including Elf, Rainbow, Black Sabbath, Dio and Heaven & Hell. He is credited with popularizing the “metal horns” hand gesture in metal culture and is known for his medieval themed lyrics. Dio possessed a powerful versatile vocal range capable of singing both hard rock and lighter ballads, according to Rainbow/Deep Purple guitarist Ritchie Blackmore upon hearing him sing, “I felt shivers down my spine.” Dio sold over 47 million albums throughout his career. (Text taken from Wikipedia)

Dio’s the best singer on earth.

He is being thanked in the cover for King of the Dead and One Foot in Hell. In the picture is Ronnie James Dio with Tim Baker.

Also of interest to Cirith Ungol and Falcon fans should be the Holy Dio tribute album featuring Destiny’s End covering The Last in Line, where Perry Grayson plays on. 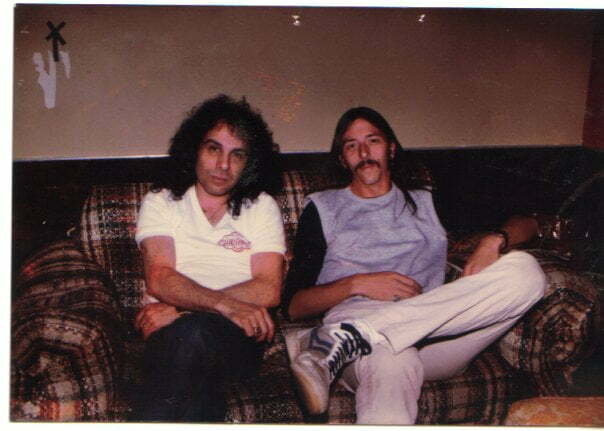