He is also the Iron Grip Management.

Jarvis Leatherby is vocalist and bassist in Night Demon. He has been arranging Frost and Fire Fest since 2015. In 2016 he joined the legion by taking the bass for Cirith Ungol’s comeback, and thereby following Flint’s and Vern Green’s previous positions. He is also Cirith Ungol’s mananger.

I have known Robert Garven for years and have had many attempts to get CU back together. I remember even calling him from Europe on Night Demon tours to tell him that so many people out there really do care about the band. Rob and Tim always thought that I exaggerated a lot (which I always do), but The last time I was out there, I took a lot of photos of battle vests, T-shirts, and even tattoos of CU stuff. When I did the first Frost and Fire festival in Ventura, ca, I had them do an autograph signing. When they saw the people that came from other countries just to meet them, I think they started to believe me. The guys in CU are my best friends, along with Armand and Dusty in Night Demon, so it was natural that they do this. I made many attempts to get Flint to play bass, but he just has too much going on in his personal life at the moment to fully commit. That’s what Cirith Ungol deserves. Full commitment!!!! Night Demon tours a lot, so in my absence, Tim;s son Matt was rehearsing with the band and playing bass. I am forever grateful for him doing that! I stepped back in on bass and I will jus say that we are all having a lot of fun! I think the coolest thing (which nobody knows) is that our rehearsal space is actually a recording studio. Not just any old recording studio, but it is the actual studio (Goldmine in Ventura, ca) that all four CU records were recorded at! The owner tours eleven months out of the year now, and there are hardly any sessions, so it was a perfect storm. The best thing is that nothing has changed in this studio since the 70’s, and I almost feel when I’m there with the guys that we are back in 1980 recording Frost and Fire! Not to mention the other three amazing albums. After years and years, I am finally successful in my quest to reunite the band, but most importantly besides me playing with my heroes, I am proud to say that if it wasn’t for the success of Night Demon global, none of this would have ever been possible. I think after a while Robert was wondering why I wasn’t bothering him once a week to get the band back together. The real reason is that Night Demon was and is touring at least seven months a year. I honestly feel that these guys saw us rise from nothing out of the same on -existent metal scene of Ventura, CA, and reach very high goals around the world. Again, these guys and the members of ND are my family and my best friends in the whole wide world! Being a part of this journey is a dream come true, and it’s absolutely meant to be.

There are plans for the band to finally hit Europe in 2017. Hard to believe they never did, but we all promise to be there sooner than later, and in grand fashion. Oddly enough, there are some new songs kicking around, but again I think that’s just because we are all having so much fun! The bottom line is Cirith Ungol is band again of today. We will see what the future brings, but right now, we just want to play for the true fans.

I will say this…. If Flint ever wants to get serious about rejoining the band, I am more than happy to step aside for hi. Also, if Night Demon ever gets in the way of CU plans and Flint can’t do it, I full Confidence in Matthew Baker to play bass in this band. The great thing and true honor at the moment is that CU always wants ND on the shows they play. It makes it much easier for e, and them too. I am also the manager of the band, so even if I wasn’t playing with them, it would break my heart to not be there for a gig. The immediate goal for the band is just to reconnect, have fun, play for the fans (old and new), and just attain the feeling of “redemption”. Redemption from the past, the history, and all the mockery that was made of the band in our city, county, state, and country for so many years. Many thanks to all of the true fans all across the world that hold this band close to their heart. You will never meet a more genuine group of guys. TO the fans all over this earth… whether you be in a big city, or small town. This is for you! We love you all!!!!

Jarvis Leatherby played a pivotal role in the reformation of the band. I had a friend Carl Valdez, who was the original drummer in a famous local punk band “Ill Repute”.

He was friends with Jarvis, and told me that Jarvis wanted to meet, to discuss Cirith Ungol. We met, and I was amazed at his stories of traveling with Night Demon. They had met many who still were interested in Cirith Ungol, especially on the continent. He suggested resurrecting the band. Jarvis was putting on a festival in our hometown of Ventura, California, the Frost Fire Festival, and had booked bands from all over the world come and play. He asked if we would do a signing session and all the original members (except Jerry Fogle who has tragically passed away in 1998) attended. The festival was a great success, and at the signing session many showed up with albums to be signed and it seemed a new generation had discovered our music, we had worked so hard on, for so many years Jarvis had invited Oliver Weinsheimer from the Keep it True Festival and after the signing session he wanted to talk to the members alone, so we along with Jarvis, retreated across the street to a local sushi bar. Oliver had been in contact me since 2004, about getting the band back together, and I had told him that I appreciated his offer, but it was never going to happen. So now we found ourselves; Jarvis, Oliver, Greg, Tim, Flint, Jimmy and myself all sitting around at a table wondering what was to come next. Jarvis having just hosted an amazing festival said he planned on putting on another one Frost & Fire next year and asked us if we would reform and were interested, we could headline his show. Oliver also talked about how successful his festival was in Germany and asked us if we reformed, we could headline his 20 th anniversary show in 2017! This was quite a bit to take in, as we had all spent the last many years pursuing other lives an getting the band back together seemed like a long shot. We were hesitant at first, but deep in our soul the fire of true metal burned, and we all decided to unleash the being called Ungol back onto the unsuspecting world! 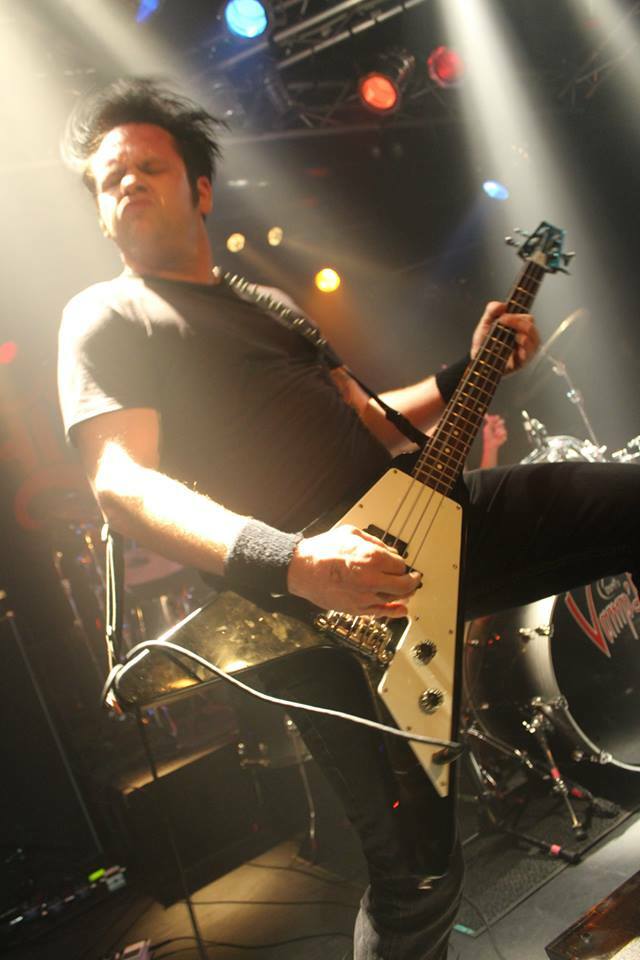